The new Morris & Co. Archive II Print and Wallpaper books arrived today at Martin - Hudson & Gibson! Before we delve right into the books, we'll bring you through a brief history of William Morris (& Co.)

Born in 1834 to an affluent middle class family in North East London, William Morris began studies of theology at Exeter College, Oxford in 1853, but quickly developed a passion for literature, architecture and art and design. After university, he went into fine art and before the age of 23 he was earning the equivalent of €84,000 per annum.

William married model Jane Burden in 1859 and they build a home together ("Red House" in Bexleyheath), decorating it in elaborate medieval style, complete with stained glass windows, tapestries and murals. After two years of building and decorating Red House, Morris took the next step in his career- he founded Morris, Marshall, Faulkner & Co. (a.k.a. "The Firm")- a company set up by "Fine Art Workmen". 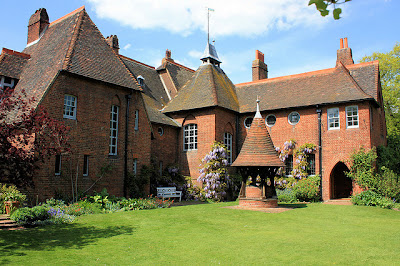 Almost immediately, Morris began creating wallpaper designs for the new company and with the help of friend Philip Webb he created his first wallpaper, "Trellis" and later introduced the "Daisy" and "Fruit" papers. 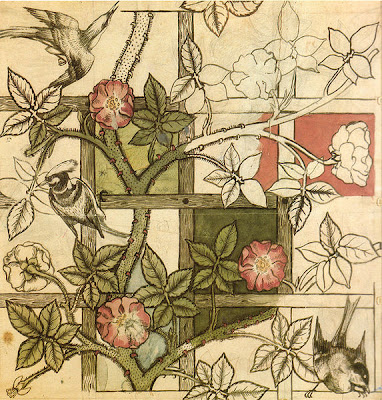 In 1875 "The Firm" ceased operations and Morris set up a new company, trading by the name of Morris & Co, taking full control. During this time, Morris experimented with traditional dyeing techniques and strengthened as a creative pattern designer by devoting much of his time to creating and perfecting ranges inspired by early 19th Century prints.
In 1881 Morris acquired a disused factory near Wimbledon and it was here that the Hallmark Morris style was perfected- deep reds and indigo tones.
The Morris & Co. showroom was set up on Oxford Street where they accepted commissions for complete interior decorating schemes and sold furniture, embroidery kits, wallpaper, textiles, ceramic, glass and brass ware to the public.

Aside from developing and strengthening his textile and paper designing empire, Morris was an acclaimed writer and poet.

William Morris died at a relatively young age, on October 3rd 1896, having "done more work than most ten men". After his death, the company changed name and ownership several times and lost its market share due to the loss of Morris' creative flair. As a result, in 1940 the company went in to liquidation, at which point Arthur Sanderson & Sons purchased the company and all its assets for a sum of £400.

Thanks to Sanderson, the brand Morris & Co. is still popular and continues to grow today.

The first design we noticed when the books arrived at Martin - Hudson & Gibson was the stand-out "Forest"; one of Morris' most successful compositions and a take on the original "Forest Tapestry" of 1887. The hare and the peacock amongst the flora and fauna have been revised in terms of scale, bringing the design in to the contemporary. The print is available in both velvet and linen. 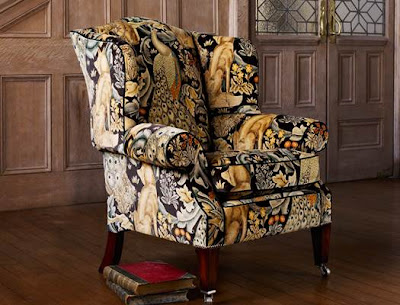 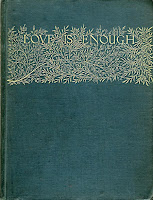 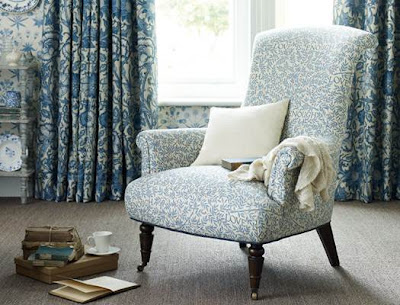 The print "Love Is Enough" pays homage to the play of the same title (and with the same typeface as on the original play cover) written by William Morris himself in 1872 when he discovered that his wife Jane was having an affair.

The "Lodden" print (pictured below) was designed by Morris between 1882 & 1885 and printed at Merton Abbey. The pattern of foliage and flowers has been faithfully reproduced to maintain the detailing originally seen in the 1880's prints. 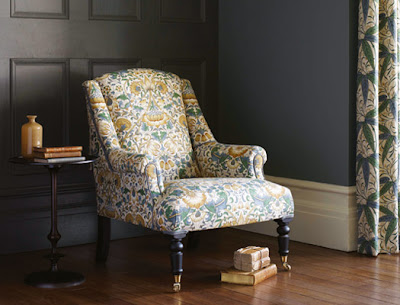 Morris' other fabrics from the Archive II prints range are "Bamboo" and "Pink & Rose", both faithfully brought in to the current day but in keeping with their original designs.

As we already know, Morris' first ever wallpaper design was "Trellis". His second creation "Daisy" (created in 1862 along with "Pomegranate") was however the first of his wallpapers to be hand block printed (1864) and later became one of "The Firm's" most popular papers. "Daisy" came in a number of colorways and became so popular thanks to the simplistic yet refined pattern, suiting a wide range of customers. 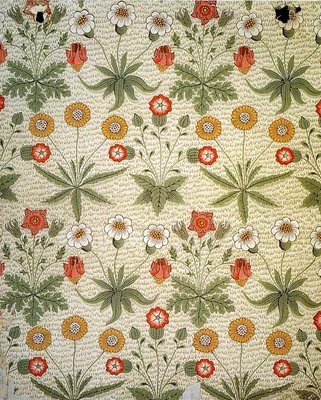 Pictured below: The more contemporary "Daisy"- the background of the small scattered tufts of grass have been removed, simplifying the design for today's market. 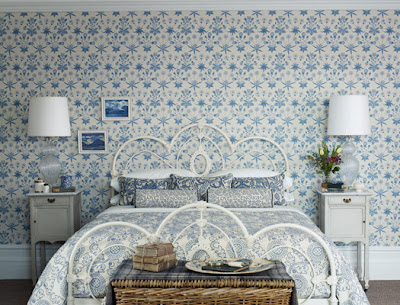 "Bird & Pomegranate" was the last patterned wallpaper to be issued by Morris & Co. and it is said that it is loosely based on the original design of the "Fruit" wallpaper, but with the addition of decorative birds, the perfect addition to flora and fauna. 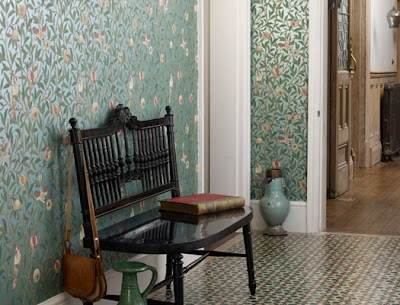 "Strawberry Thief", "Chrysanthemum" and "Acanthus" make a reappearance in the Archive II collection with revised colour schemes. Pictured below is "Chrysanthemum", inspired by the national flower of Japan; 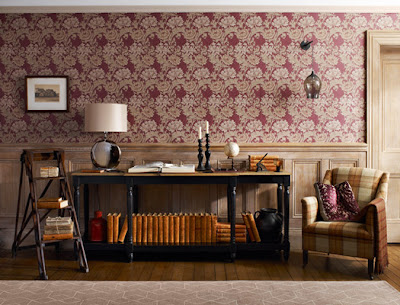 If you would like to order any of the Morris & Co. Archive II Prints or Wallpapers, please contact the Interior Designers at Martin - Hudson & Gibson of Sandycove, Co. Dublin. We would love to assist you in your selection and can ensure that our fitters, upholsterers and curtain manufacturers meet the high standard that Mr. William Morris himself would have been proud of. 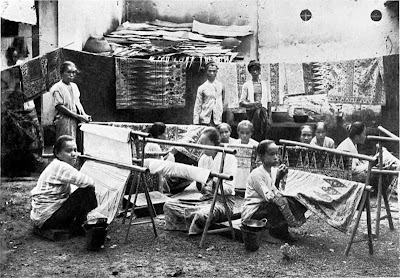 Batik- An ancient art and craft